Attendance Up at Atlanta Shoe Show

From the August 24 issue of Footwear News. 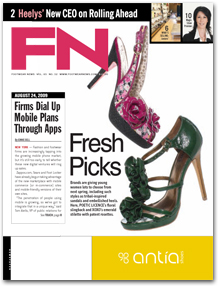 ATLANTA — Despite discouraging sales trends in much of the footwear industry, the mood at the Atlanta Shoe Market, held here Aug. 14-16, was one of optimism, as visitor attendance jumped 16 percent from last year. Among the retailers touring the aisles were regulars such as Belk, Peebles, Shoe Carnival and Shoe Show, and newcomers Boscov’s and Von Maur. Independent store owners reportedly came from across the Southeast, as well as more distant areas including the Midwest, Southwest, New England and Caribbean.

While pricing continued to be a factor, buyers at the Atlanta Shoe Market said they were on the hunt for uniqueness.

“Price is my No. 1 concern, but I also want something different,” said Iva Fearing, owner of Tassels in Morehead City, N.C. “[Our customer] is not going to replace something she already has in her closet. She wants something new.” Fearing said she was looking to pick up new brands at the show and was impressed by All Black.

Another standout brand was Naot, according to Paul Weiner, owner of Walk’n Shoes in Boca Raton, Fla. “It looks sensational,” he said.

Aaron Sackler, the third-generation head of Sacks Outdoors in Hattiesburg, Miss., also placed orders with Naot, as well as Chaco and Ugg. “For casual shoes, I want something that stands out, feels good and is at a good price — in that order,” said Sackler, who was targeting the best-selling styles from the brands he currently carries. “I’m not going as deep [with my inventory]. And I’ve been asking about closeouts when [vendors] have them.”

To entice retailers, exhibitors were emphasizing merchandise that had added value, including quality craftsmanship and comfort features.

“[Brands’] rental space in stores has gotten more expensive. Your product has to have special characteristics and has to mean something,” said Gary Yosco, account executive for Circa Joan & David, who was touting the comfort features in the brand’s Luxe line. “If it costs $110, it should look like $130 and feel like $150.”

Other labels presenting comfort-focused fashion were Kenneth Cole, with its Silver Collection, and Calvin Klein.

At Lucky Brand footwear, produced by The Camuto Group, the spring ’10 offering focused on natural leathers and unique detailing, such as embroidery and studding. “The formula is price, details and quality,” said brand account executive Bari Draznin. “Right now, the customer is looking [for those things], and if you have all three, it’s a formula for success.”

To accommodate the Atlanta Shoe Market’s continued growth, its organizers from the Southeastern Shoe Travelers Association said they hope to take over more space in the Cobb Galleria in 2010 and are considering creating a special area for contemporary brands.

Laura Conwell-O’Brien, executive director of SESTA, said she is also looking into extending the show hours for the first two days of the event. “We’re here to serve our members, and that’s our sole purpose,” she said.